MODEL HISTORY & PRODUCTION
In 1954, Mercedes displayed a concept version of the 190SL at the New York Auto show alongside the 300SL “Gullwing”. This concept came to market in 1955 as the 190SL, a more approachable, less intense sports car compared to the record-breaking 300SL ‘Gullwing’. The factory offered for the causal weekend racer a Rennsport package, options of an aero screen, cut down doors which one could convert, removal of bumpers & lighten the 190SL. While the 190SL features a carbureted 1.9 liter inline four cylinder engine compared to the 300SL’s direct-injected 3 liter slant six, they share basic engine design, suspension system, and level of detail and craftsmanship that defines Mercedes-Benz.

The new engine, which shared the same bore and stroke of the 300SL, was paired with dual Solex carburetors and produced 120 horsepower. This powerplant was paired with a fully synchronized 4-speed transmission that sent power to the rear swing axle. The 190SL implemented the same suspension systems as the 300SL, all it be a much stable low pivot point assembly, affording it confident handling and drivability without the tail happy nature of the 300SL “Gullwing”.

The 190SL is immediately recognizable as a Mercedes, featuring dramatic curves and through yet restrained use of brightwork that defined this era of Mercedes. Many styling cues are borrowed from the 300SL “Gullwing” as well, notably the massive three-pointed star in the grille, head lamps, bumpers, dash, early 190SL bucket seats as well as ‘eyebrows’ over the wheels all it be finished with chrome.

While the 190SL did not quite offer the performance of other sports cars of the era, the impeccable quality and attractive styling made the 190SL a massive success- selling 25,881 units before production ceased in 1963. Many of these models were delivered to the United States, where its driving demeanor and elegant styling were highly valued. The 190SL is an important part of the culture of small roadsters in the 1950s, as it demonstrated how luxurious the platform could be. Now much sort after & highly collectible due to its “Style & Beauty”.

THIS MOTOR VEHICLE
Original Italian delivery to European specification residing in the dry state of Italy, before finding its way to Switzerland where the current owner imported to the UK, where it’s now registered.

Retains many of the early features of the first production 190SLs and is eligible and well suited for the modern Mille Miglia event which is reserved only for cars that participated in the original, historic race held between 1927 to 1957. This is a crucial factor for many classic car enthusiasts, as it was recently discovered that a Mercedes-Benz 190SL was privately entered in the 1956 race and thus joins the privileged list of vehicles.
The Mercedes-Benz 190SL was manufactured from 1955 to 1963. This 1955 example is one of the very first produced and has the desirable early specifications like the ‘Gullwing’ type sports seats providing for a firmer and sportier seating position.

A matching engine and chassis numbers 190SL in its original black exterior colour complemented by black mohair hood and cream leather interior. Great basis for a conversion to the optional factory SLR specification to make for a light weight racer with aero screen and cut down doors.

Extensive full restoration work was completed by its current owner retaining as much attention to detail as possible with the use of original parts. The bodyshell was stripped down to bare metal and needed very little work to the outer body panels, a credit to its original state. Running superbly on original Solex carburettors set up by Parry Chana of Lux Classics.

This 190SL comes with extensive history file detailing the restoration, original documentation dating back to 1960s and invoices to the 1970s. A small window hardtop comes complete with all chrome fittings together with a radio delete plate.

This vehicle will represent a good acquisition opportunity for a collector, investor or first time classic car buyer, as being a most desirable model reminiscent of the much valued 300SL Roadster and Gullwing coupe.

Vehicle available for viewing in the UK near Stansted Airport on an appointment basis. 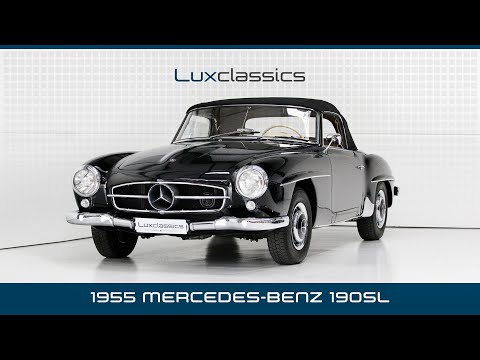 Reasons to buy from us

About us
Located & accessible from London in Chelmsford, Essex. Lux Classics specialises in premium classic car sales and restoration of marques such as Mercedes-Benz, Porsche, Jaguar, Ferrari and Aston Martin. Our showroom offers easy access from the M25 and is approximately 36 miles from London’s Canary Wharf or 45 mins by train from Liverpool Street mainline Station. The showroom is supported by extensive workshops, staffed by a highly dedicated team of experts, who are well rehearsed in the preservation and care of fine automobiles. At Lux Classics we believe strongly in attention to detail and that many cars are functional works of art – made to be driven. After all, good preparation for ‘driving classics’ is essential for driving passion.
Warranty
Warranty Available.
Terms and Conditions
Viewing Strictly by Appointment Only.

Information about the vehicle above is provided by the Dealer for guidance. eBay does not make any representations or warranties that such information is correct. eBay does not have control over and does not guarantee the quality, safety or legality of items advertised or the truth or accuracy of the content of this information. Please satisfy yourself before purchase that the information is correct by contacting the seller.
Copyright © 1995-2021 eBay Inc. All Rights Reserved.
Designated trademarks and brands are the property of their respective owners.
Use of this Web site constitutes acceptance of the eBay User Agreement
and Privacy Policy.
MILLE MIGLIA ELIGIBLE 1955 MERCEDES-BENZ 190SL

Original Italian delivery to European specification, before finding its way to Switzerland where the current owner imported to the UK.

Extensive full restoration work was completed by its current owner retaining as much attention to detail as possible with the use of original parts. The bodyshell was stripped down to bare metal and needed very little work to the outer body panels, a credit to its original state.

This 190SL comes with extensive history file detailing the restoration, original documentation dating back to 1960s and invoices to the 1970s.

£38,075
>>>
We use cookies on our website to give you the most relevant experience by remembering your preferences and repeat visits. By clicking “Accept”, you consent to the use of ALL the cookies.
Do not sell my personal information.
Cookie settingsACCEPT
Manage consent

This website uses cookies to improve your experience while you navigate through the website. Out of these, the cookies that are categorized as necessary are stored on your browser as they are essential for the working of basic functionalities of the website. We also use third-party cookies that help us analyze and understand how you use this website. These cookies will be stored in your browser only with your consent. You also have the option to opt-out of these cookies. But opting out of some of these cookies may affect your browsing experience.
Necessary Always Enabled
Necessary cookies are absolutely essential for the website to function properly. These cookies ensure basic functionalities and security features of the website, anonymously.
Functional
Functional cookies help to perform certain functionalities like sharing the content of the website on social media platforms, collect feedbacks, and other third-party features.
Performance
Performance cookies are used to understand and analyze the key performance indexes of the website which helps in delivering a better user experience for the visitors.
Analytics
Analytical cookies are used to understand how visitors interact with the website. These cookies help provide information on metrics the number of visitors, bounce rate, traffic source, etc.
Advertisement
Advertisement cookies are used to provide visitors with relevant ads and marketing campaigns. These cookies track visitors across websites and collect information to provide customized ads.
Others
Other uncategorized cookies are those that are being analyzed and have not been classified into a category as yet.
SAVE & ACCEPT